Russell Westbrook (Thunder): Hope you’re not talking to your teammates, or else nobody would be listening, after this summer.

Damian Lillard (Blazers): Very funny. Now, I have a message to pass along from Stephen Curry:

Kemba Walker (Hornets): So, ummm, I guess we all need to make personalities for each other than?

Kyrie Irving (Cavaliers): You made a grammatical mistake by using “than” instead of “then” in an incorrect fashion. Therefore, I took it upon myself to correct you.

Kemba Walker (Hornets): I don’t need you correcting me. Haven’t you read these chats with all of the other idiot point guards? Their all making grammatical mistakes too!

Kyrie Irving (Cavaliers): That did not have a subject, which you need in every sent-

Damian Lillard (Blazers): Irving, since you went to Duke or something I guess, you’re the smart one.

Deron Williams (Mavericks): You know who is not cool though? Coach Rick Carlisle!

Jeff Teague (Hawks): Oh man, does Deron Williams have another problem with another coach? TELL ME MORE!

Deron Williams (Mavericks): So like, I just come into Dallas. And apparently here, he wants us to go to practice!

Ty Lawson (Rockets): How could he?! 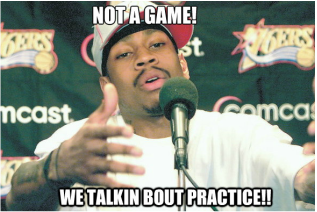 Derrick Rose (Bulls): #TBT to when the 76ers actually had a decent point guard.

Jeff Teague (Hawks): No, you do. And so does your team.

Damian Lillard (Blazers): Sorry Wroten, but you’re the one who sucks and whose team sucks as well.

Deron Williams (Mavericks): Damn right I will! Dude thinks he’s going to have us practice…

Damian Lillard (Blazers): Umm… I don't think you understood exactly what I meant.

Eric Bledsoe (Suns): You know who always understands exactly what I meant?

Rajon Rondo (Kings): Not even joking. Like any shotguns laying around so that I can just put an end to this misery?

Brandon Knight (Suns): Did he go to Kentucky, just like you?

Brandon Knight (Suns): Is he a guard on the Suns, just like you?

Brandon Knight (Suns): Is he your FAVORITE teammate?

Derrick Rose (Bulls): Get a room, you two.

Brandon Knight (Suns): Does he wear matching culottes with you every Sunday?

Damian Lillard (Blazers): This is getting weird, fast.

Brandon Knight (Suns): Was he breast-fed by the same woman that you were?

Brandon Knight (Suns): Relax. I was just going to ask if it's me?

Eric Bledsoe (Suns):  Now that I think about it, though, all of those things apply for you as well…

Damian Lillard (Blazers): Bledsoe and Knight, you two nit-wits are just going to be the duo.

Russell Westbrook (Thunder): Ok, as the best point guard here, I have made a rule for this chat.

Russell Westbrook (Thunder): Did you actually just say that you’re better than me?

Derrick Rose (Bulls): And you know what? I got something else to say! I’m…

Kemba Walker (Hornets): This doesn’t actually work, does it?

Kyle Lowry (Raptors): Did it work?

Kyrie Irving (Cavaliers): My good friend Russell Westbrook, I do plead that you…

Russell Westbrook (Thunder): That I what?

Kyrie Irving (Cavaliers): Will you… will you remove me from the chat if I finish my sentence?

Kyrie Irving (Cavaliers): Ok, excellent. So as I was saying, I do plead that you…

TheBallBlog: That doesn’t work on me, idiot.

Jrue Holiday (Pelicans): What the heck was that?!

TheBallBlog: Westbrook, you have been granted the power of the chat manager. You must not abuse your powers, okay?

TheBallBlog: But since nobody here is actually allowed to get a good personality, your other personality will be the ball hog.

TheBallBlog: Still doesn’t work on me.

Jrue Holiday (Pelicans): If I say no, will that even change anything?

Mike Conley (Grizzlies): YAY! I knew you would. So there I was, just walking on my front lawn yesterday morning to get the newspaper, when I literally SAW a...

Mike Conley (Grizzlies): I was telling a story! Listen up!

Mike Conley (Grizzlies): So as I was saying...

Kyle Lowry (Raptors): So the weather has been nice lately...

Kyrie Irving (Cavaliers): Indeed. I do in fact enjoy the warm blend of summer and fall during this time of year.

Mike Conley (Grizzlies): WHY WON'T YOU GUYS LISTEN TO ME?!

Damian Lillard (Blazers): Conley, it's because you're the boring one, due to your boring play style and...

Mike Conley (Grizzlies): My boring playstyle and what?

Damian Lillard (Blazers): Oh damn, is that all? We only established 6 of the 12 remaining personalities! We’re going to have to establish the other 6 next week in Establishing Personalities, Part 3! Curry is going to freak.